Where to find Dole Whip at Disney World

Where to find Dole Whip at Disney World

I like to go into detail about everything, so first, let’s cover some basic Dole Whip FAQ:

What is Dole Whip?

Dole Whip is arguably the most popular sweet treat at Disney World. That is saying something because Disney has a lot of sweet treats.

Dole Whip is also completely gluten-free as well as dairy-free making it a great ice cream alternative for both lactose-intolerant guests and vegans. We’ll talk more about that in a bit.

If you are getting anything other than “regular” Dole Whip, make sure to ask about gluten, dairy, or any other allergens.

Although Dole Whip is a famous Disney snack, you can also find it at Universal Orlando! More on that later.

If you’re obsessed with all things pineapple, check out The best pineapple farms to visit in Hawaii. Spoiler alert, the Dole Plantation is on the list!

How much does Dole Whip Cost?

A simple cup of Dole Whip starts around $5, but more elaborate or alcoholic versions can be up to $15.

Is Dole Whip covered in the Disney Dining Plan?

Yes! Dole Whip itself is vegan. It is coconut-based! However, not all Dole Whip treats will be vegan. Anything mixed with vanilla soft serve is obviously not vegan.

Vanilla soft serve, even the Dole Brand, is milk-based and, therefore not vegan or dairy-free.

Make sure to ask if you have anything added to plain Dole Whip.

Dole Whip is also gluten-free; although toppings may not be if you follow any special diet or have allergies, always ask when ordering.

Disney is fantastic with accommodating allergies and dietary preferences. 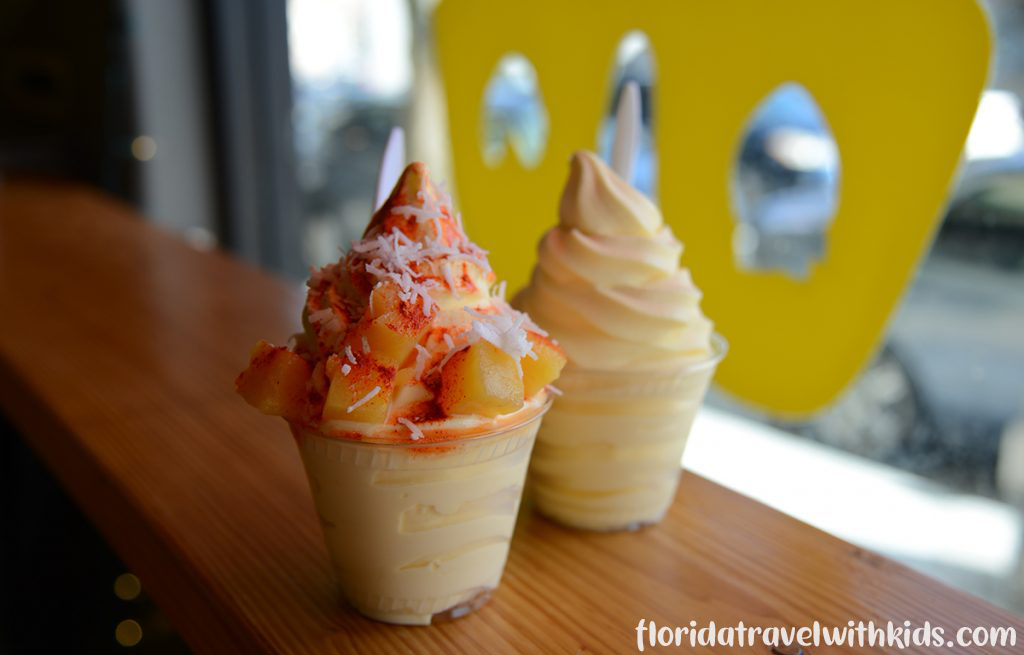 Where to find Dole Whip at Disney theme parks

First things first, let’s talk about where to find Dole Whip at the Disney theme parks. Dole Whip is a great way to cool down on a hot day; check out how to keep cool at Disney World for more tips! Also, make your Disney vacation more fun by staying close to the theme parks! Check out the closest Disney Resorts to the Parks to learn more.

The first place that most of us think of when we want Dole Whip is Aloha Isle in Magic Kingdom.

You can fold cups of Dole Whip at Tamu Tamu Refreshments in Africa. Adults can also add light or dark rum to the Dole Whip (for an up-charge, of course.)

Tamu Tamu Refreshments also offers the “Simba Sunset,” which is Dole Whip, strawberry, coconut, and watermelon syrup. “King Cooler” is the same thing but with rum added for about $5 more.

Although Dole Whip is not always offered at EPCOT, you can often find it during the festivals. If you’re visiting EPCOT during a festival, make sure to check the festival booths.

During the Flower and Garden Festival, you may be able to get your hands on Dole Whip with rum at either the Refreshment Port or the Pineapple Promenade Booth.

However, if you’re looking for where to find Dole Whip at Disney Hollywood Studios, sadly, you will not find any Dole Whip in the entire park. Since this is my favorite Disney park, I hope that they will add Dole Whip someday. For now, try blue or green milk—also vegan, very different from Dole Whip. 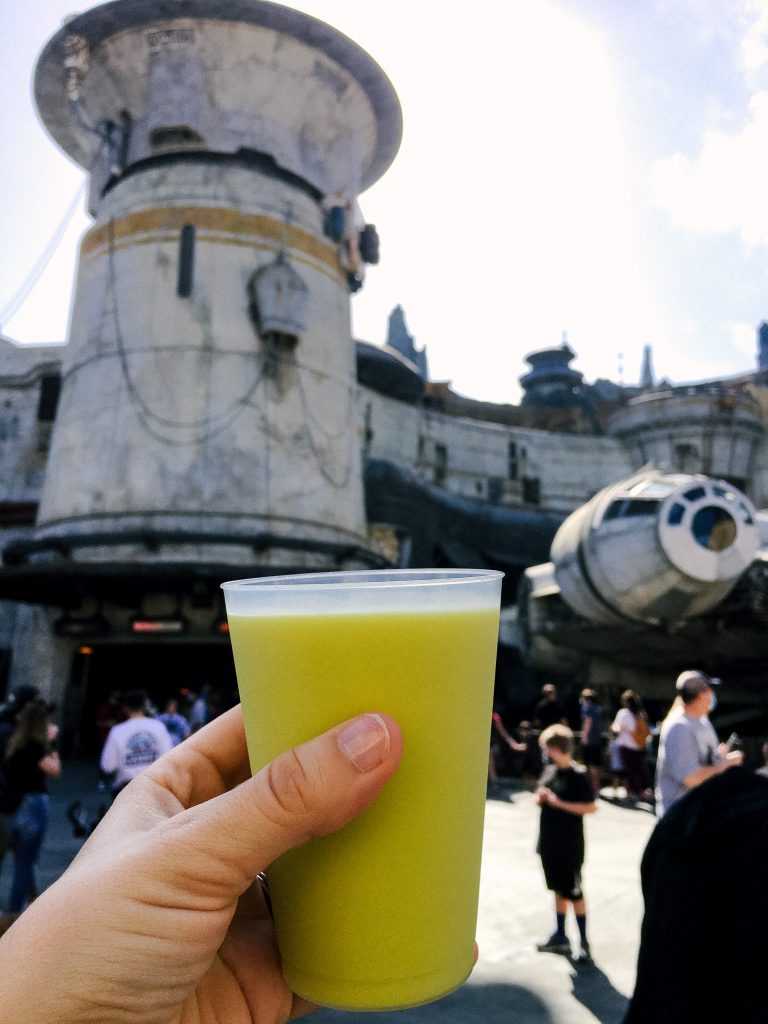 For now, the closest place to find Dole Whip is Boardwalk Joe’s Marvelous Margaritas which will be discussed later.

Marketplace Snacks offers either a cone or a cup of Dole Whip. Adults can also add rum if they would like. Yes, adding rum to Dole Whip is very popular.

Sometimes other Dole Whip offerings will pop up around Disney Springs, but your best bet is Marketplace snacks. 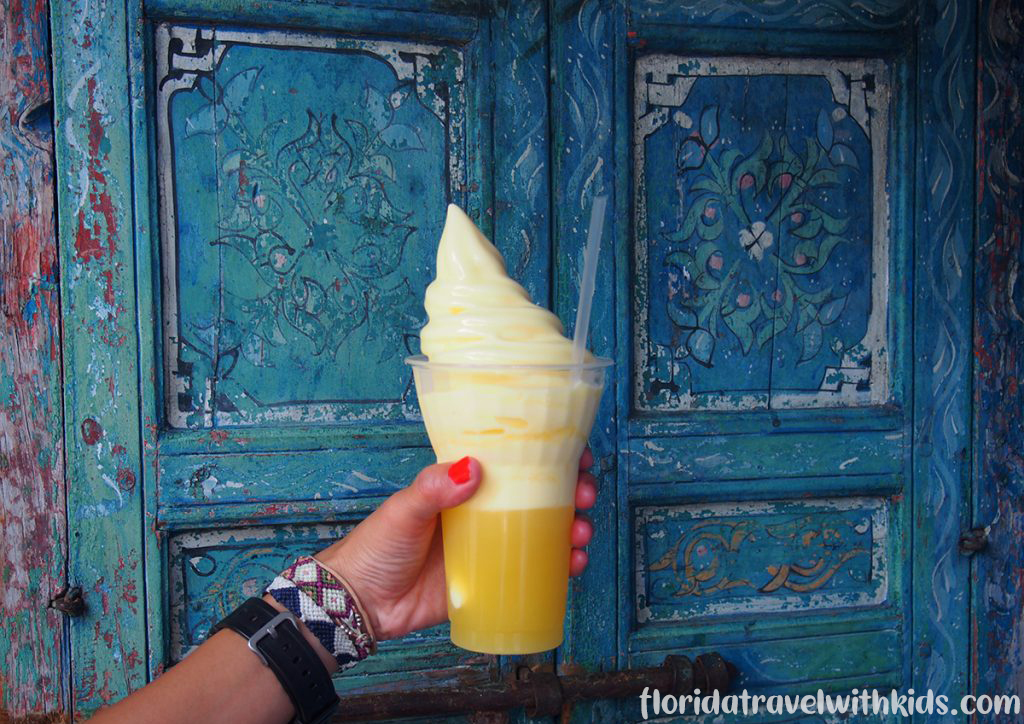 Where to find Dole Whip at Disney Resorts

If you’re staying in a Disney Resort, you may be able to get a Dole Whip without going far. Most people know that you can find Dole Whip at the Polynesian, but other resorts offer this popular treat too.

By the way, make sure to check out the Closest Disney Resorts to the Parks!

If you’re trying to figure out where to find Dole Whip at Disney, one of the first places that come to mind is the Polynesian Village Resort.

It makes sense that this pineapple-based beverage would be found in the Hawaii/South Pacific-themed resort!

Pineapple Lanai at the Polynesian offers regular Dole Whip as well as Dole Whip with rum. You can also find other Dole Whip-based adult beverages at Trader Sams and The Barefoot Pool Bar.

If you’re staying at Pop Century Resort or the nearby Art of Animation Resort, check out the Everything Food Court for a classic Dole Whip.

If you’re staying at any of the skyline resorts, hop over to Pop Century and get some Dole Whip. Check out 7 things you need to know about the Disney Skyliner while you’re at it.

You can often, but not always, find Dole Whip at Silver Screen Spirits Pool Bar.

This is the closest location that serves Dole Whip to the Dole Whip-free Hollywood Studios.

Where do I find flavored Dole Whip?

Flavored Dole Whip, such as lime, raspberry, lemon, and others, are seasonal and tend to come and go. If you see a specialty Dole Whip, make sure to get it because it might not be offered anywhere else!

Where to find Dole Whip outside of Disney in Orlando

Please let me know your favorite Dole Whip flavor or treat in the comments too! Do you mean like Dole Whip, or go for something a little fancier?

Don’t forget to check out the rest of our Disney tips and tricks:

I highly recommend buying your tickets and Disney hotel through Undercover Tourist.

There are many really scammy sites out there, so make sure you’re booking through an approved partner (like Undercover Tourist.)

If you plan to stay off-property, I recommend checking out Expedia

to see what is available in the Orlando area outside of the Disney Resorts. 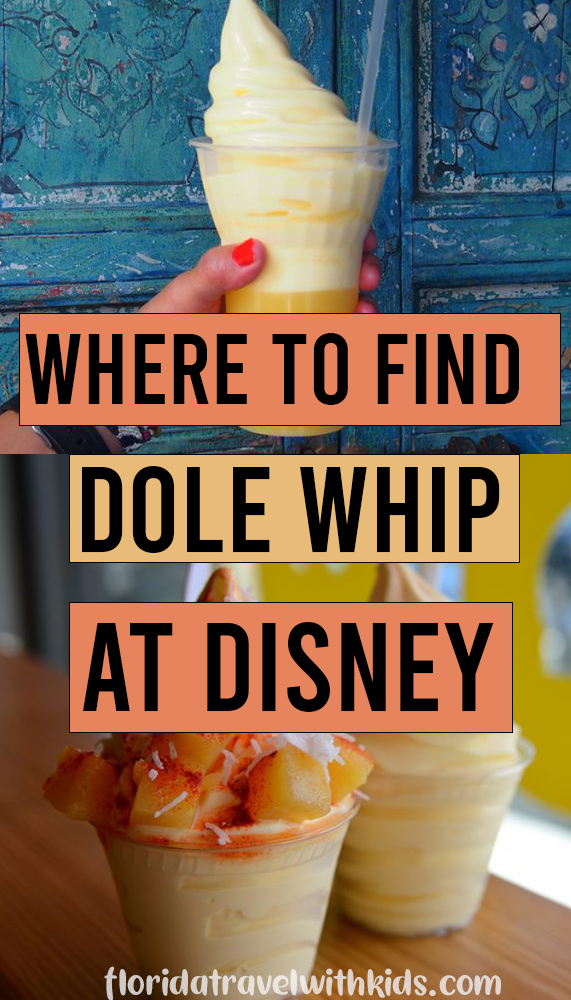 30 Things to do in Clearwater with Kids
Next Post:Marriott Cypress Harbour Villas Review near Universal and Disney 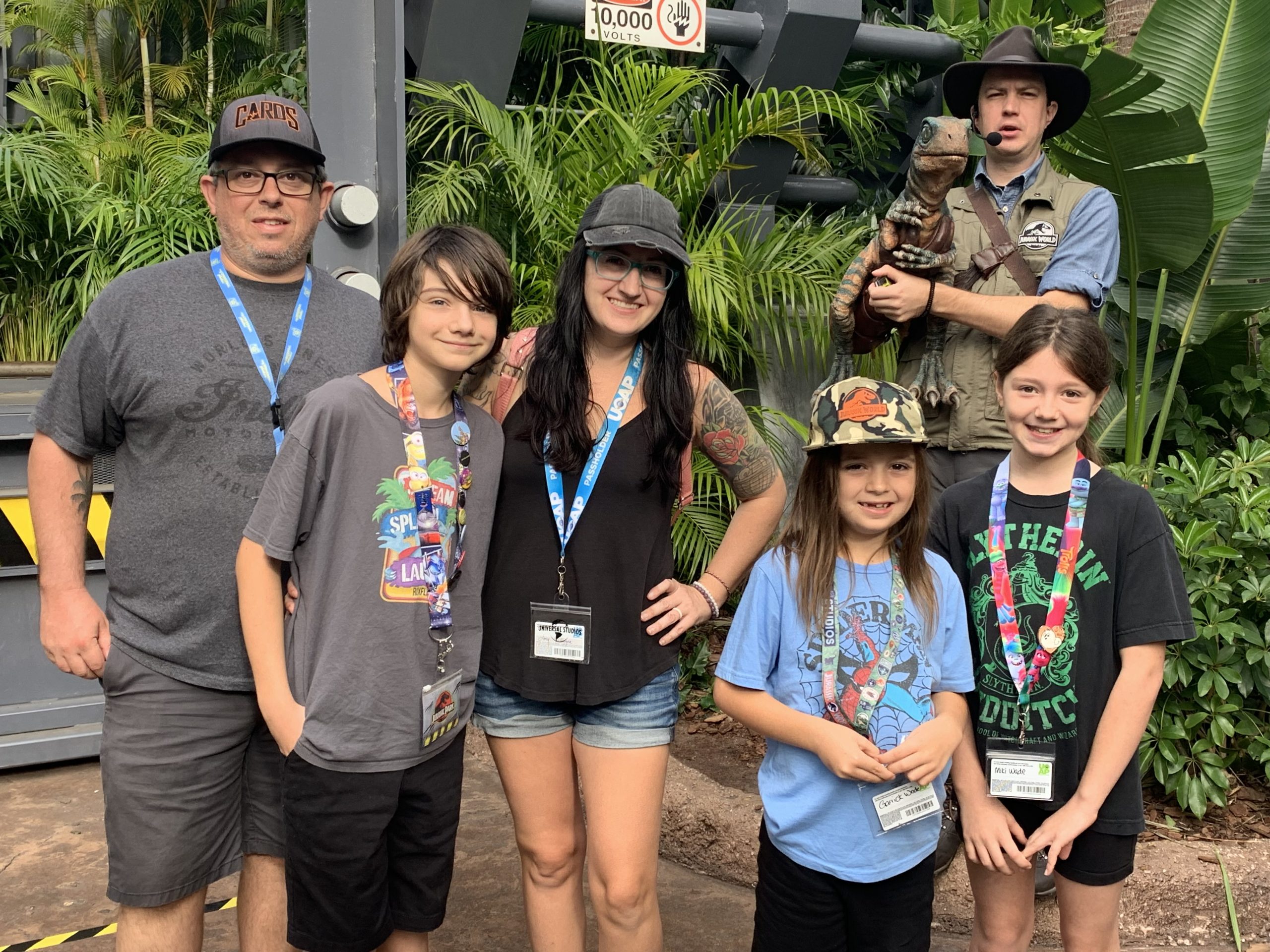